Chikyu drilled deeper into the seafloor than ever before, but could not reach point where tectonic plates meet. 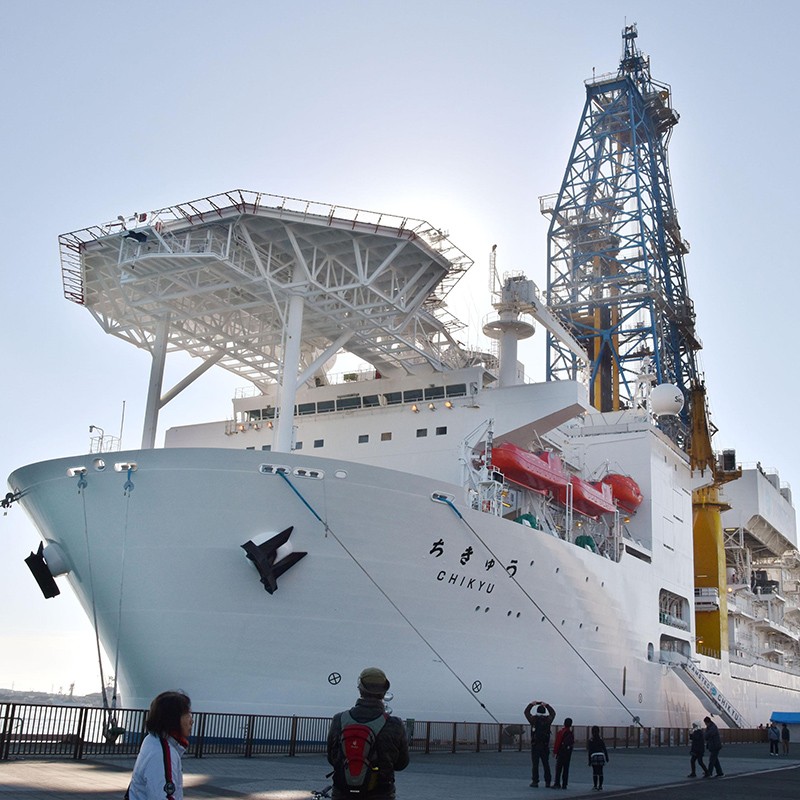 Japan’s flagship ocean-drilling research vessel, Chikyu, has drilled deeper into the ocean floor than ever before. But it failed to achieve its ultimate goal of penetrating 5,200 metres beneath the sea floor, into the realm where two tectonic plates meet and cause enormous earthquakes. Engineers gave up on that long-sought target in February, after the drill hole kept collapsing, just over 3,250 metres beneath the sea floor.

“It was a continuous six-month nightmare,” says Nobu Eguchi, director of operations at the Institute for Marine-Earth Exploration and Engineering (MarE3) in Yokosuka, which operates Chikyu.

Now researchers are trying to work out what went wrong. Next month, the board that oversees Chikyu’s operations will meet in Kobe to discuss the failed drilling attempt. The Japan Agency for Marine-Earth Science and Technology, which includes MarE3, is also convening an independent review panel.

It is a disappointing end to the almost decade-long effort to drill deep into the Nankai Trough off Japan’s southeast coast. There, one chunk of Earth’s crust — the Philippine Sea plate — ploughs beneath another, the Eurasian plate. That collision causes the area to unleash devastating earthquakes roughly every 100 to 150 years. Most recently, a pair of quakes that each measured over magnitude 8 struck in 1944 and 1946.

The plate boundary is so deep that Chikyu is the only scientific ocean-drilling vessel capable of reaching it. The ship uses a structure known as a riser, similar to the technology used on an oil rig, to stabilize its drilling equipment and penetrate the water, the sea floor and beyond.

Last October, Chikyu made its fourth trip to a site on the Nankai Trough known as C0002, where it had already drilled the deepest-ever hole beneath the sea floor. Engineers knew that the next phase of drilling would be tricky, because the hole penetrates rocks that are fractured and folded. The rocks shatter vertically, along the same path that the drill is trying to take. The MarE3 team was able to deepen the hole from just over 2,900 metres beneath the sea floor to 3,262 metres, breaking its own record for the deepest scientific ocean drilling. But the researchers couldn’t go any farther.

Although engineers lined the hole with steel as they drilled, it kept collapsing at the bottom, says Eguchi. The team eventually backed up a few hundred metres and started drilling a new branch off to the side of the main hole. The technique, known as sidetracking, is used in oil and gas exploration but is not common in scientific ocean drilling.

That hole also kept collapsing, and the engineers tried to establish more sidetracks. None worked. Eventually, the team had to cut the drilling pipe and withdraw for good.

Eguchi says that the researchers don’t yet know what went wrong. The mud circulating within and around the deep drilling equipment might have been heavier than expected, or tiny cracks in the rock might have destabilized the hole. The MarE3 team had tried to adjust its drilling procedures to prepare for the extra weight of heavy mud, and had reinforced the rock face with fibre.

In the end, a borehole with many side branches may have been just too complex to pull off. “We knew it was going to be an engineering challenge to drill the hole — partly because of the extreme depth, partly because of the unknown geological material we were going into,” says Harold Tobin, a geophysicist at the University of Washington in Seattle and one of the project’s chief scientists. “We strived, and it exceeded our grasp just a little bit. It’s a shame and a bummer.”

Tobin and others described the Nankai drilling project on 28 May in Chiba, at a meeting of the Japan Geosciences Union.

After the C0002 hole failed, Chikyu moved on to drill without its riser in shallower holes nearby. Its other scientific accomplishments over the years include exploring how much heat life can withstand in sediments beneath the sea floor, and the geology of the shallow fault that unleashed the devastating 2011 Tohoku earthquake1. The ship also investigated the many small, slow-motion earthquakes that strike the Nankai Trough, in addition to the large, devastating ones2.

Chikyu’s future schedule is yet to be decided, although many are not giving up on reaching the 5,200-metre goal. The lessons learned from the C0002 drilling will help to advance deep-sea drilling techniques, says Clive Neal, a geoscientist at the University of Notre Dame in Indiana, who heads a review board for the US scientific ocean-drilling vessel JOIDES Resolution.

And once the various project reviews are over, the Chikyu team will decide whether to ask for more money from the Japanese government to try again. The latest expedition cost around US$55 million to operate, says Shin’ichi Kuramoto, the director-general of MarE3. “Chikyu must do it,” he says. “I myself wish to do it again.”

But if so, Tobin says, Chikyu would need to start a fresh hole. C0002 is destroyed beyond repair.